According to water.org, 128 million people in India lack access to safe drinking water. I suspect that’s an underestimate because the World Bank estimates that 21% of communicable diseases in India are due to unsafe drinking water. Water in India is often contaminated by pollution, or poor sanitation. India’s local governments in cities, towns and villages struggle to meet the drinking water needs of their citizens. Even when water is available, its quality is often in question. No wonder that several companies from the Tatas to Unilever have identified water purification as an important product category to be in.

About Eureka Forbes – a Pioneer in Retail Appliances for Water Purification

Eureka Forbes has been one of the pioneers in the water filtration/purification business in India. The company made its name as the pioneer of large-scale direct selling in India through the sale of vacuum cleaners. Few people in urban India would have escaped the attention of a Eureka Forbes salesman – it has an 8,000-strong direct sales force across 550 cities/towns Their meticulous training system for direct sales has made them the preferred source of direct sales people in the country.

Though Eureka Forbes has a formidable presence in the country through its flagship Aquaguard product, the company continues to search for new and better ways of providing clean drinking water to its consumers. Recently, Dr. Raman Venkatesh the CTO of Eureka Forbes spoke to a group of IIMB executive education participants about how his company manages its innovation activity. 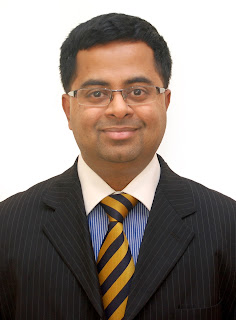 Eureka Forbes has some distinctive advantages in the appliance market. It has strong name/brand recognition, and distribution muscle through its direct sales force, presence in retail outlets (about 15,000 dealers across 1800 towns) and strong service network  (1100 service centres across India).  Yet, as a medium-sized company (Eureka Forbes is not listed, but it is estimated to be a Rs. 1,500 crore company), it does not have the luxury of huge resources to spend on R&D. Besides, there are important developments in water purification technology happening across the world. In these circumstances, Eureka Forbes has adopted open innovation as its innovation approach. Though it doesn’t have a structured scanning process at present, it keeps its eyes and ears open for new technologies from anywhere in the world. It encourages its employees to bring in such ideas to the company.

One important mechanism it uses is the Euro Senate – a group of 8-12 employees, cutting across functions, elected by all employees of the company every year. These eurosenators play the role of a product council to solicit and pilot new product ideas. While many of these ideas come from the field through interactions with customers, one big idea came through the sister of a Eurosenator who alerted the company to an important new technological development in water purification reported in the media in the US.

Reflecting the company’s ability to translate knowledge into innovation and operational excellence, Eureka Forbes has been a winner of the “Most Admired Knowledge Enterprise” Award four times. Other important Eureka Forbes knowledge management initiatives include an intranet portal, Euroshare, where employees submit and share their knowledge and expertise, and a knowledge helpline that employees can access to give immediate answers to customer queries.

Of course, given the company’s strong competitive position in one of the world’s biggest markets for water purification, Eureka Forbes is an obvious target for research institutions and companies trying to license out new technologies. Eureka Forbes has taken special care to build a reputation as a good partner so as to encourage more such enquiries to come their way. They have an open invitation for technology partnerships on their website!

Though Eureka Forbes takes different forms of formal intellectual property protection to improve appropriability, the company believes in frequent product introductions as a way of staying ahead (see my previous post on how effective innovators combine legal protection with product-market actions – Eureka Forbes is a good example of this). Their target is to achieve 20% of their revenues from products launched within the last 5 years, but they are currently achieving a “new product vitality index” of more than double that with 3 – 5 new product introductions every year in the last 5 years. 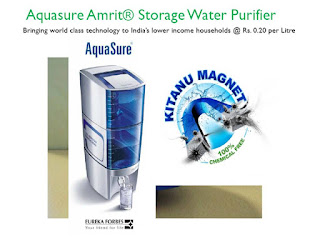 One of the challenges Eureka Forbes faces is translating its innovations into a language that customers can understand. One of their recent products, AquaSure, is based on Amrit ®, an integrated multi-stage technology that the company sourced from Argonide Corporation, a company based in Florida. This disruptive technology based on a Nanoceram filter allows the transformation of even contaminated water into water as clean as bottled water without the use of chemicals. The filter attracts viruses and other biological micro-organisms “like a magnet,” thus providing “sabse surakshit paani.” See video of interview with Raman Venkatesh and Fred Tepper from Argonide Corporation USA to understand more about the technology. The technology is cost-effective as well with Eureka Forbes estimating a water filtration cost of 20 paise per litre.

As is often the case with successful innovations, innovation has to enter the marketing and advertising domain as well. The technology may be highly sophisticated but technology doesn’t sell unless consumers can relate to it – hence Eureka Forbes came up with the kitanu magnet campaign, a memorable advertising approach that communicated the almost miraculous power of the technology in a way the consumer can understand. (See the video which likens the process through which Aqua Sure acts like a magnet, pulling out all contaminants, to the way the police catches criminals). 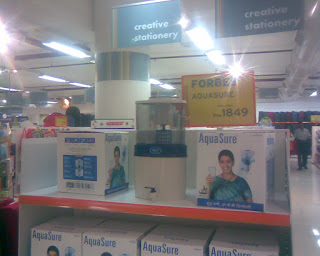 Of course, while open innovation may be an optimal strategy for Eureka Forbes, the challenge of putting the country on a trajectory of technology development remains. Availability of clean water continues to be a challenge in India, and several CSIR labs and other research institutions have been working on water purification methods for decades. Some of these, like the Reverse Osmosis method, have been commercialized, but it appears that we have not been able to keep pace with technological developments outside the country that allow even higher degree of purity, and safety against biological organisms. Let’s hope that we can put our scientific talent and industrial capabilities together to create distinctive technological capabilities of our own.
Posted by Rishikesha Krishnan at 4:34 AM