Does India provide a supportive environment for getting value out of innovation?

When we talk about supporting innovation in India, the first things that come to mind are the availability of capital and people with the right skills. But, the efforts and risks involved in innovation don’t make sense unless inventors and firms can get value out of their innovative activity.


When will innovation make money for inventors? That depends on issues like: Are users willing to try out new products and services? Do the capital markets place a premium on companies that are more innovative? Can an inventor protect his innovation from being copied by others, i.e., can he be sure that he (and he alone) will be able to capture the value from the innovation he creates? The right hand side of the framework below captures these “demand-side” factors. 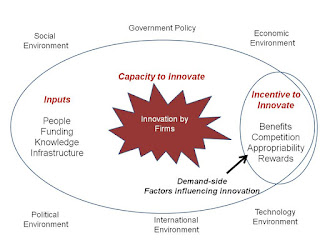 In this article, I will focus on the last question – the issue of value appropriation - and ask a broad question: Does India provide a supportive environment for appropriating value from Innovation?

Of course, I must add that from a firm-strategy perspective, appropriating value does not depend on intellectual property alone. As the graphic below (adapted from VK Narayanan’s book Managing Technology and Innovation for Competitive Advantage) shows, a firm’s ability to appropriate value from innovation also depends on its product market actions as well as its ability to innovate continuously and stay ahead of competitors. But, the intellectual property environment, and IP strategies followed by the firm form an important third prong, and these are the focus of this post. 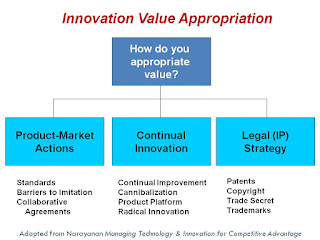 Independent India started off with a fairly strong intellectual property protection system. This should not surprise us because this was intended to protect the rights of British inventors under the colonial regime. However, there was growing disquiet about this system in the first two decades after independence, particularly in the area of pharmaceuticals where strong patent protection was seen as enabling multinational drug companies to extract monopoly profits from a poor country. As is well known, this culminated in our making important amendments to the Patents Act including removal of provisions to patent new molecules, and providing relatively short periods of patent protection in all cases. The new legislation – the Indian Patents Act of 1970 - is commonly credited with the growth of India’s generic pharmaceutical industry (based on an ability to create new processes for known drugs and scale them up effectively) and some of the lowest priced drugs in the world.

By the 1990s, many things had changed. Globalization was the order of the day, and India had climbed on the globalization bandwagon. International talks were on to provide a supportive environment for global trade. These talks expanded in scope to incorporate intellectual property protection. In 1995, India signed up for the GATT treaty and promised to put in place stronger intellectual property laws by January 1, 2005. India kept its promise, though not everyone is happy about this! But, the timing was right – by 2005, many Indian companies were taking innovation more seriously, and were therefore looking for stronger intellectual property protection for their inventions.

Where do we stand today?

While the law changed, the procedural aspects of patenting have taken time to catch up. One of the important characteristics of a good patent system is easy availability of information about what patents have been issued. For several years this was a major bottleneck in India with such information not available online, and available only through a set of CDs compiled by TIFAC in Delhi. Even now, though there is an online database, it is nowhere as powerful or as comprehensive as the US PTO’s website. I would have thought that with all our software and IT prowess we should have been able to build something better than what the US PTO offers but…

Another important procedural issue is the speed with which the Patent Office considers applications, and the quality of the examination process. The importance of this dimension was recognized some years ago and a drive to hire and train patent examiners was launched. But, I saw a recent advertisement of the Controller General of Patents, Designs & Trademarks calling for applications for trademark examiner positions in which they are offering a consolidated salary of Rs. 25,000 per month to people with a degree in law and 3 years experience. I am sure it will be a challenge to get well qualified people at that level of compensation.

In an alternate effort to speed up the process, there was a proposal to involve the CSIR in preliminary screening and evaluation. But this was objected to by many as the CSIR itself is an active player in the intellectual property space and is, in fact, the Indian entity with the largest number of US patents.

While it’s difficult to judge the quality of patent examination, what we do know is that after an initial spurt in the speed of examination and grants, the process has slowed down again at a time when the number of applications is on the increase. Mint newspaper carried a useful graphic recently summarizing the challenge: 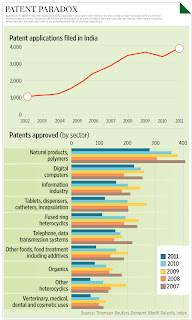 As far as I can make out, there has been reasonably widespread acceptance of the amendments to the Patents Act made in 2004, 2005 and 2006 except for a couple of issues. The first issue is the now infamous Section 3 (d) that seeks to prevent evergreening by pharmaceutical companies by requiring a major inventive step as reflected in enhanced therapeutic value for a molecule to be awarded a patent. This has been a contentious issue almost since Day 1 of the new patents legislation, and a series of refused / cancelled patents to big name pharmaceutical companies has shown that the law has bite.

The second issue has been the issue of compulsory licensing. On March 9, 2012, the Controller General of Patents issued the first post – 2005 compulsory licence to Natco Pharma to manufacture its equivalent of Bayer’s Nexavar, a drug for treatment of kidney cancer. This has raised a hornet’s nest, as it has raised contentious issues like (1) what is a reasonable price for a drug? (2) what constitutes “working” a patent? and (3) what is the appropriate royalty to be paid to the inventor company in the event of compulsory licensing?

It’s fascinating to note that most of the controversies regarding the new patent law in India have centered around the pharmaceutical space. Globally, the big debates on intellectual property in recent times have been in the smart phone space involving companies like Apple, Samsung, and Google (Motorola Mobility). It’s almost as though we live on two separate planets! I suppose the reason for this is that India is still not a big market for high end smartphones and therefore the patent and design wars of this industry have not spilt over into India. But this is also another indication that India has failed to find a place at the high table of the most active innovation domains (see my earlier post on the areas in which India has the most active researchers).

In our obsession with the healthcare domain, we might be missing out on developments in other sectors that call for changes in our intellectual property protection laws. A new generation of software product companies is emerging from India (see my recent article in Outlook Business), and large companies like TCS and Infosys are embracing products and platforms in their quest for “non-linear” growth. But we continue to deny software products patent protection and limit their intellectual property protection to the Copyrights Act.

Consistent with their position in other matters, Indian courts tend to be conservative in penalties and awards for intellectual property violations unlike the multi-million dollar (or even multi-billion dollar) awards of American courts. In a way that’s good because it prevents intellectual property from becoming a separate game of corporate strategy. But the flip side of this is that there is the distinct possibility that an inventor may not receive adequate compensation for infringement of his intellectual property rights.

This become particularly critical in the case of the small inventor who anyway fights a David vs Goliath battle if the infringer is a large company with the ability to exploit all the procedural opportunities for delay available in the Indian legal system. In fact, if I were an inventor in India that would be my main fear – I may be able to obtain a patent and other forms of intellectual property protection, but will I be able to enforce my patent rights in a meaningful and timely way? Even in the US, the inventor of the intermittent windshield wiper, Robert Kearns had to struggle for years in his battle with large US auto companies (see the graphic below); I shudder to think what would happen to an equivalent inventor in India! 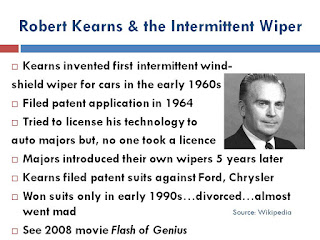 As we go forward, there will also be a need to ensure greater consistency in judicial decisions in the intellectual property domain. Without any disrespect meant to our honourable judges, I can see that in some of the recent judgements they have struggled to cope with the technicalities involved. Not too far in the future, when we have a critical mass of intellectual property cases, it will help to have a single court at the appellate level as has been done in the US.

In the 1950s and 1960s, we saw companies like Xerox and Pilkington Glass that established monopolies in their respective industries based on technologies which had strong patent protection. Today, the pace of innovation in most industries has hastened to the extent that companies need to innovate continually to derive maximum benefit from their innovations. But, intellectual property rights continue to provide the first-level protection for innovator companies.

As India develops a modern industrial economy, and more companies depend on innovation for their competitive advantage, our need to provide an appropriate level of legal support to enable innovative companies to capture the benefit of their innovations will grow. In this, our priority should be on improving IPR-related information flows, better processes and procedures, and enforceability, and on shifting our attention beyond the healthcare industry.

Posted by Rishikesha Krishnan at 7:15 PM