The Newspaper Industry: Innovate to Survive?

I recently had the privilege of addressing the International News Media Marketing Association (INMA’s) South Asia conference. Major print media organizations are members of the INMA, and the INMA’s conferences provide a great opportunity for people from the “business” side of the media industry to come together and share notes about current trends. Mr. Bhaskar Das from the Times of India group was the inspiration behind this year’s conference, and his endeavour was to bring fresh thinking into the print media industry by inviting a diverse set of speakers from outside the industry to share their perspectives. My talk was a part of this initiative.

Crisis in the Western Print Media

In the west, all discussions in the print media center around just one word – internet. Like many other industries that have digitisable content (music, books, films), the print media has gone through a tumultuous time over the last decade. Circulation has plummeted as readers preferred to get their news from the internet when they want it, and in the form they prefer. With the decline in circulation, advertising revenues have gone down, putting the basic business model of the average newspaper or magazine in peril. While the print media embraced the internet, most newspapers were slow to adapt to the medium and initial websites were just html versions of their printed newspapers. Only now have most newspapers realized the power of the internet, and today media websites contain additional stories, multimedia content, interactive features, and more active reader participation. 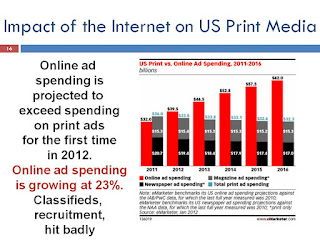 The Western print media has struggled to find sustainable models to keep afloat. Advertising on their websites has provided an alternate source of revenue, but this has been inadequate to cover the advertising revenue lost from their print editions. Except in publications offering specialized content like the Wall Street Journal, media sites have been hesitant to charge readers for accessing web content because early efforts in this direction were largely unsuccessful, and such approaches seem to be in conflict with the culture and philosophy of the internet.

Crisis for some represents opportunity for others! Some new business models have evolved in the last few years:

1. Embrace the Internet & proliferate across the Web: This strategy is often associated with Schibsted, a prominent Norwegian media house, which has built a strong position in Norwegian language portals. Its goal is to bring readers directly into its website so that its webpages are more valuable to advertisers. According to reports, more than one-third of its operating revenue comes from the Internet.

2. Build a multimedia brand: Germany’s Bild group has used this approach to extend its prominent position in the tabloid market across other media including the mobile internet through partnerships with leading telecom service providers.

3. Internet only, leveraging the power of the Internet: The Huffington Post is closely associated with this approach. The Post has a small core staff, and most content is user/reader-generated, so costs are manageable and can potentially be covered by advertising revenues. Articles written by celebrities help drive more traffic to the site. The Post’s model got a formal endorsement when AOL-Time Warner acquired it for $315 million!

Print media companies have used the traditional survival methods of companies as well – reduce costs through downsizing, close unviable editions, reduce the size of the newspapers, share printing and distribution arrangements, merge with other companies, etc. But while these efforts have succeeded in buying some more time, they haven’t solved the fundamental problem of long-term sustenance.

As advertising revenues are inadequate to cover their costs, the print media confronts the challenge of deriving more explicit revenue from their content. So, some prominent names including the Times of London and the New York Times have now turned back to attempts to charge readers for accessing digital content. 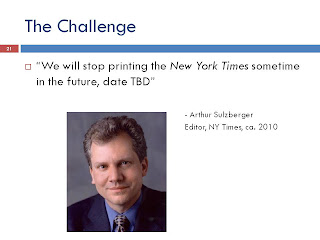 A recent Harvard Business School analysis suggests that a web-only strategy that includes user payment could be viable for the Times, but the chief challenge is how to make the transition from the present strategy to the new one!

So far, the Indian Print Media industry has remained relatively insulated from the disruptive changes elsewhere. Low internet penetration in India has meant that the shift to the internet has not been as pronounced as in the West. Circulation figures for Indian newspapers, particularly in local languages, continue to climb reflecting increasing literacy. Volatility in the financial performance of Indian print media houses has been due to other reasons largely outside their control such as economic/business cycles and changes in the price of newsprint. Business decisions such as pushing for leadership in markets dominated by competing brands (such as the Times of India’s push in Delhi & the Hindustan Times push in Mumbai) have also taken a toll on profitability. 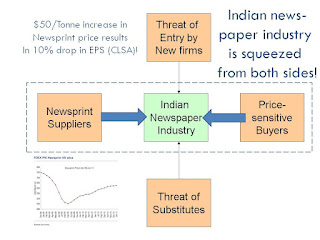 Innovations have been largely on the marketing front. These include “invitation” pricing, co-creation approaches to enter new markets (Dainik Bhaskar has been the most successful proponent of this approach), and “private treaties” (equity stakes in exchange for media access). The private treaties in particular have come in for some criticism as they threaten to blur the line between “objective”and “paid” content. 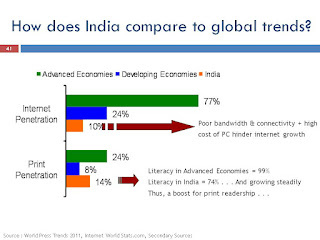 However, the dangers of the Internet are not far away for English language newspapers in India. When I recently did a straw poll in my MBA class, I found that less than 10% of the students read a traditional newspaper regularly. Among mid-career executives, almost all of them buy a newspaper, but most of them depend on the internet to get their news. It seems unlikely that our current MBA students will buy newspapers even after they enter the corporate world. So, my prediction is that the internet will be a serious threat to English language newspapers in the next five years.

Given the reluctance of Indian consumers to pay for things they access from the internet, the Indian print media is likely to be more dependent on online advertising than their counterparts elsewhere. I believe that the shift to the internet, when it happens, will be more disruptive for the print media in India than elsewhere in the world.

Posted by Rishikesha Krishnan at 8:22 PM