Aadhaar is a distinctive project, aiming to give a unique ID to each of the 1.2 billion people of India. This is perhaps the first time that IT and biometrics are being used on such a large scale anywhere in the world. And, don’t forget that government-sponsored projects can have huge positive impacts in terms of spillovers – the Internet had its origins in a US Defence Advanced Research Project Agency (DARPA) project to network defence computer systems; Israeli companies are world leaders in IT security partly due to the innovative work Israeli engineers do on military service projects; and, even in India, Sam Pitroda’s C-DOT created structured programming and related software expertise for telecom switches for the first time in the country. We may not have a Facebook or a Google in India so far, but the Aadhaar project uses the kind of technologies that lie at the back of these iconic names.

Aadhaar has five design goals that have driven the project: (1) Scale; (2) Speed (has to be done in a well-defined time scale); (3) Cost-effectiveness; (4) Quality; and (5) creating a platform for other innovations.

One distinctive dimension of innovation in Aadhaar is in organizational design. While the UID authority handles strategy and architecture, other activities are largely outsourced. But all  procurements, financials, etc. follow the government system.

Government often tends to work in the silos of the existing ministries and departments. But an endeavour of this scope and size has to be a collaborative effort if the design goals are to be met. One of the major innovations of Aadhaar has been to build different ecosystems that allow such collaborative working.

The term “Public Private Partnership”(PPP) is invoked often in India with the hope of taking advantage of the best of the government and the private sector. Aadhaar seeks to put PPP into practice on a large scale but with relevant checks.

Aadhaar has more than 50 registrars, agencies that have something to do with people and already interact with large numbers (such as state governments and large public corporations). For each of these registrars, Aadhaar will provide an opportunity to clean up their own databases.

75 enrolment agencies have been empanelled. These enrolment agencies do the actual mechanics of enrolling members of the public into Aadhaar. Quality control of the enrolment agencies is done through software. Each operator has to use the latest approved version of the Aadhaar enrolment software on the computers it uses. Version upgrades are done periodically as in the case of a typical desktop software product like windows. UID avoids the hassle of procuring hardware and also the risks of obsolescence by requiring enrolment agencies to buy their own hardware (computer, scanner, fingerprint reader, etc.) out of an approved list of vendors. They can use either Windows or Linux as OS. For the operator, the process works as “plug and play”. Operators themselves have to be certified before they start doing registrations.
Aadhaar pays through an incentive-compatible, variable cost business model. Each registrar gets Rs. 50 for each enrolment. Hence it’s in the interest of the registrar to do more enrolments. Enrolment agency gets paid from this Rs. 50.

The Aadhaar programme uses a “Big Data” philosophy. For example, all operational data regarding the process is captured – how long an operator took for each registration, the number of repeat attempts, delays, efficiency, etc. This “data virtualization” allows for advanced analytics and monitoring of the whole process. Thus Aadhaar seeks to manage through data and analytics rather than through the customary government approach of resource ownership. Based on the data, Aadhaar can ask for some operators to be removed if necessary.

For a project of this scale and complexity, one of the big challenges is finding the right people. The talent available in the government particularly in high technology areas is often not adequate, and hiring new people is also difficult. To overcome these constraints, UID has hired people on sabbatical from established companies, volunteers (often people with considerable experience in the industry who now want to give back), and interns, who have joined for the learning opportunity. These are complemented by people from the government system – but care has been taken to have a diversity of people cutting across services, ministries and backgrounds. Aadhaar is being managed with a core team of less than 200 people.


Aadhaar represents a first principles approach on how to solve a problem of this magnitude. During enrollment, Aadhaar biometrically compares every incoming enrollment with all existing enrollments in the database. This is a 1:N biometric search. Currently Aadhaar is doing 200 trillion biometric person matches/day for de-duplication. Aadhaar has 3 engines at the back that divide all the load. A job can be allocated to any of the three engines. These three engines are provided by different companies. Comparisons can be made between the engines to see which one is doing the job most efficiently or accurately

Aadhaar uses a number of open source technologies like hadoop, hbase etc. that are used by Facebook/Twitter to allow "limitless" horizontal scalability of the systems using commodity hardware.

Later, once the Aadhaar system is in use, the focus will shift to authentication. Authentication will involve a 1:1 biometric match between the "biometric" presented by the resident and biometrics linked to the provided Aadhaar number. Online authentication will allow Indian residents to provide their "identity" online anywhere in the country.

So far, Aadhaar’s approach seems to have been successful. Not only have millions of Indians been registered, the system has achieved a de-duplication accuracy of 99.965%. This is critical because earlier identification schemes in India (PAN card, Election ID etc. ) have been plagued by duplication and individuals holding “multiple identities.” 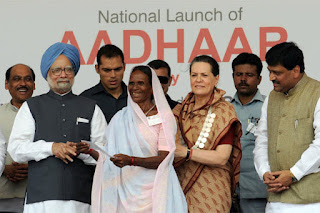 Other platforms will ride on top of Aadhaar. One of the first platforms will be for financial inclusion, payments, etc. Aadhaar will act as a KYC and a financial address, and provide authentication at a micro-ATM. In the financial sector, Aadhaar will provide a platform for banks to move from the obligation of providing low-cost rural banking to the opportunity of creating a robust rural banking business model. Several banks have already signed up to work with Aadhaar on this.

One of the advantages of the system is that is can be deployed asynchronously. A few states can come on board first, or a few banks, it is not essential for everyone to come together on board at the same time.

Though the Aadhaar project is again under attack from the Home Ministry’s National Population Register project, this turf battle hopefully will not obscure the several innovations that have gone into this UID project
Posted by Rishikesha Krishnan at 6:55 PM