The recent release of the QS University rankings for 2012 once again put the spotlight on the challenges before Indian universities. India has no institution within the top 200 universities in the world, a sad statistic for a country that is aspiring to superpower status. There have been several analyses of why India doesn’t do well on these rankings, and I won’t cover that ground here. But, for a useful and practical assessment of how Indian institutions can bridge the gap, I recommend Dheeraj Sanghi’s blog on the subject.

One of the areas in which Indian institutions usually fall behind their global peers in such rankings is research output. Thomson Reuters announced its 2012 Research Excellence India Citation Awards a couple of weeks ago, and the list of awardees provides some insight into where excellent research is being done. The list also tells us something about the fields in which we have individuals doing outstanding research. Remember, that these highly productive, top notch researchers are responsible for creating the research reputation of a School.

The Thomson Reuters methodology is described on their website. Essentially, they have identified 10 Indian researchers who have consistently published highly cited papers over the period 2002-2011. Each researcher in their award list had at least 5 papers that were among the top 1% of cited papers in their respective field over the period of review. 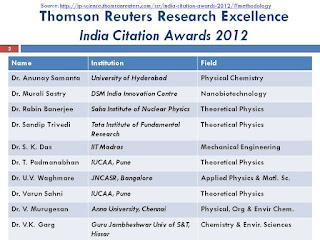 It’s good to see a couple of very high impact researchers at less renowned universities. We should salute these “bright spots” and understand how they have been able to do such good work amidst institutional constraints.

These citation awards underline a major challenge before Indian S&T research. Our strengths still lie in areas where we were traditionally strong like Theoretical Physics and Chemistry. We have not been able to nurture or support high impact researchers in emerging technology areas. Our top engineering schools, while producing lots of papers, are not producing enough high impact research. Changing this should be top on the agenda of our top science and technology academies.

A caution: Winners of previous Thomson Reuters India awards in 2004, 2006, 2009 were not considered this time. A more comprehensive analysis will need to take their names into account.

Posted by Rishikesha Krishnan at 7:57 AM