As an observer of innovation in India, one of the challenges I face is assessing how the quality of innovation is changing with time. Some of the questions I keep asking myself are: Are the ideas behind the innovations more powerful than before? Are the innovations likely to have a greater impact? And, are we going to see companies from India attain global leadership in their respective fields thanks to their innovative prowess?


A couple of companies/innovations in recent months look particularly promising… Please decide for yourself whether these herald a new frontier in Indian innovation!

Vigyanlabs: The Power of Identifying the Right Challenge Book

Whether it is the Indian cricket team or students coming in to our MBA class at the IIMs, there is a perceptible shift away from the metros. It looks like this phenomenon is spreading to innovation as well. One of the more innovative companies that I have seen in recent times, Vigyanlabs, is based not in Bangalore, but in Mysore, about 130 km away.

In our recent book 8 Steps to Innovation, Vinay Dabholkar and I emphasized the creation of a challenge book to guide the process of idea generation. Powerful challenge books have their origin in pain, wave and waste. 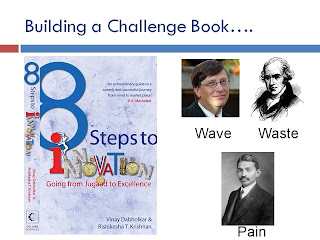 The focus of Vigyanlabs’ innovation, intelligent power management of IT systems, straddles all three of these. The creation of huge data centres has been an important wave of the last decade that shows no sign of abating soon; these data centres generate lots of heat and then need strong cooling systems resulting in the use of huge amounts of electricity and contribute in a big way to global warming; and power bills are a big pain point for data centre operators. According to Vigyanlabs, in 3 years, the power costs of a server exceed the cost of the server itself!

In most IT systems, optimization of power consumption happens at the individual component level. For example, the chip maker optimizes power consumption of the chip, the operating system (OS) designer that of the OS, etc. Vigyanlabs’ distinctiveness is its focus on the application level. Their power management system comes with standard policies for selected applications, but also the option to customize where necessary. The use of application sensors is at the heart of their system. 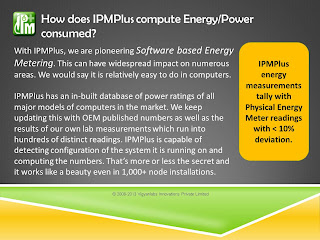 A few things impressed me about the Vigyanlabs innovation. Firstly, their core idea is covered by a US patent (No. 8, 201, 007). Secondly, they have a clear quantification of the power and cost savings they are able to offer customers, based on a mathematical model they have developed (typical power savings for a data centre is 30%). Thirdly, they already have an OEM customer who is using their power management system.

Pune-based Persistent Systems has been around for some time. The company’s CEO, Anand Deshpande, has been an articulate supporter of the need for IP-based and product-based innovation in India. Though I don’t know Anand personally, I have had the pleasure of being a fellow member of iSPIRT’s Founders’ Circle. 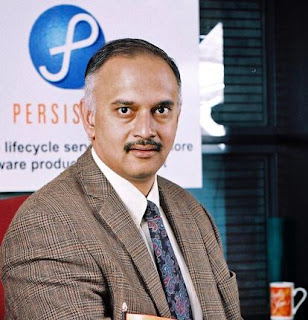 Persistent did some really nifty work with the trail-blazing TV show Satyameva Jayate (SJ) last year. Aamir Khan and the producers of SJ were very keen that the show should have a strong participative element continuing after the show, and also wanted to have a quick and ongoing sense of the audience responses to the (controversial!) themes the show raised. The challenge was to convert huge amounts of unstructured data (e.g. 1 – 1.5 million tweets, posts on FB and other messages after each show) into a reliable assessment of audience sentiment within just a few days (each episode was aired on a Sunday. The assessment had to be completed by the following Friday!). The challenge was particularly pronounced before and immediately after the first episode because the whole concept was new.

While sentiment analysis is not a new problem, SJ posed some complicating factors. Audience communication was in a mix of languages with English interspersed with the local lingua franca. The messages were emotionally-laden. Many messages (particularly those submitted to the show’s website and on FB) had long paragraphs, and partitioning these appropriately was a challenge. SJ’s producers wanted only 60 representative messages from the million+ submitted to be shown on the website – how were these to be picked? Further, since the show was dealing with controversial issues like child sexual abuse and disability, the messages displayed on the website had to be clear of any identifiers that could intrude into anyone’s privacy.

At the end of all this analysis, Aamir Khan and the producers were interested primarily in the 60 representative messages, a dashboard giving a bird’s-eye view of the responses, and, most importantly, an insights analysis that would suggest post-show follow-up and advocacy.

The key to this entire process proved to be what we have referred to as an innovation sandbox in 8 Steps to Innovation. Here the sandbox focused on the rapid creation of a dictionary after the first episode, and the development of a proprietary tool that would attach a sentiment tag (on a scale of -5 to +5) to each message. Rapid validation of the performance of this tool was an important step in making sure that the analysis of audience response was accurate. A 5 social scientist team (with a background in ethnographic research) made significant contributions to the entire interpretation process. 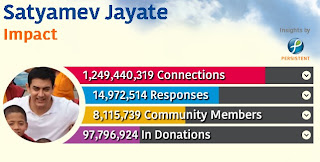 SJ was a highly successful show. It generated 15 million responses, from 8 million unique community members. Aamir Khan was able to take some of the issues to the highest authorities in the land and, in some cases, have almost immediate action taken to change laws and policies. All this was possible because of the rapid and accurate analysis of audience sentiments soon after each show, based on the Persistent system.

Posted by Rishikesha Krishnan at 7:09 PM