Last week I participated in a fascinating seminar on “Nurturing, Managing and Institutionalising Innovation” organized by DRDO. Among other things, this seminar only reinforced my sense that….

Indians are no less creative than others…

Every time I listen to Professor Anil Gupta, he provides fresh evidence that people in our country have a wealth of clever ideas. People in Meghalaya place shelves at different heights above their stoves to cure wood and make other creative uses of waste heat; a class one student in Tamil Nadu wondered why the suction mechanism in the soles of his shoes could not be used to clean the floor, resulting in his becoming India’s youngest patent holder; a school student in Delhi designed a suitcase trolley that can be converted into a chair when you have to wait in a railway station or bus stand; and an IIT Kanpur student has designed a wheelchair that can go up and down stairs (see the picture below). We have hundreds of such instances of individual creative ingenuity at its best, cutting across region, gender, and age. 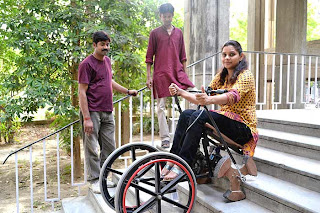 Anilji’s talk reiterated what I have always felt – creativity, per se, is not a problem in India.

But is such creativity directed towards the right problems?

My collaboration with Vinay Dabholkar in the last couple of years has highlighted the importance of directing this creativity towards working on the right problems if innovation in India is to have more impact. In the organizational context, we have suggested building “challenge books” so that creative energy is directed towards solving the “right” problems.

Of course, this could happen serendipitously as well. In such a situation, the challenge is to recognize the value of the idea you have spawned, and find ways of taking that idea forward. 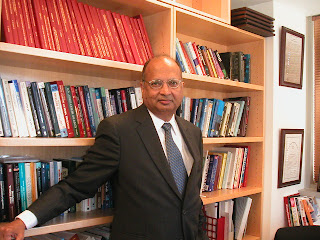 A talk by Dr. A. Paulraj at the DRDO seminar highlighted the importance of recognizing the value of “simple” ideas and pursuing them till others recognize their value. (Dr. Paulraj’s experience also illustrates once again that Indians ca n be among the most creative people in the world!)

Dr. Paulraj has had a fascinating career – born in Pollachi in Tamil Nadu, he started his career with the Indian Navy. Almost 40 years ago, he built a sonar system for the Navy that was recognized among the world’s best sonar systems. Later, he founded a DRDO lab (the Centre for Artificial Intelligence and Robotics) and the Central Research Laboratory at Bharat Electronics Ltd.

For most people, these achievements would have been good enough for one life! But, in the early 1990s, Dr. Paulraj embarked on a new career as a professor at Stanford University and made some fundamental contributions to modern wireless communications that led to his being awarded the prestigious Alexander GrahamBell award of the IEEE. 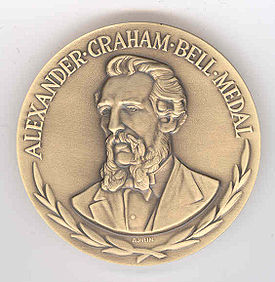 Two companies he founded (later sold to Intel and Broadcom respectively) were an integral part of this journey.

Dr.Paulraj’s most impactful idea was related to MIMO (multiple input multiple output), a wireless technology that is at the heart of many modern telecommunication systems including core 4G and 4G Wimax. According to wikipedia, “multiple-input and multiple-output, or MIMO, is the use of multiple antennas at both the transmitter and receiver to improve communication performance. It is one of several forms of smart antenna technology. MIMO technology has attracted attention in wireless communications, because it offers significant increases in data throughput and link range without additional bandwidth or increased transmit power. It achieves this goal by spreading the same total transmit power over the antennas to achieve an array gain that improves the spectral efficiency (more bits per second per hertz of bandwidth) or to achieve a diversity gain that improves the link reliability (reduced fading).”

Dr. Paulraj described how, when he first proposed the idea, it was questioned by others as it went against extant paradigms in the field. In fact, when Stanford University first invited major wireless companies for a discussion on possible licensing of the technology, there were no takers as the companies believed the technology wouldn’t work. But Dr. Paulraj persevered with the idea, and built his own start-up to demonstrate its potential. It took close to 10 years for Iospan, the company he founded, to establish the commercial viability of this technology. Vinay often talks about the intense experimentation that is needed to take an idea to a demo (or proof of concept) , and then from concept to the market. In this case, that process took about ten years. 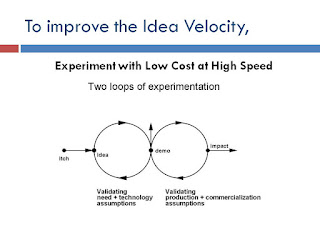 What was particularly fascinating was how Dr. Paulraj, a newcomer to the field, could make a major breakthrough within a few years of entering the field. This demonstrates the power of coming into a field without pre-conceived notions or being seeped in existing paradigms – you can think differently and originally, and question existing dogmas and the so-called “received view.” But it certainly requires a high level of self-confidence and self-belief to do so!

Can such innovation be done in India?

Dr. Paulraj wondered aloud whether what he has accomplished in the United States in the last two decades could have been done in India. In a quick evaluation of the Indian innovation ecosystem, he said that India is well placed on 3 dimensions – access to global knowledge on par with the rest of the world; a large volume of talent; and increasing government support. He was particularly appreciative of the talent available in India, and said that in his second start-up (Beecem) MTechs from the Indian Institute of Science working out of Bangalore were able to do as well as PhDs from the top universities in the United States.

Dr. Paulraj’s assessment of the challenge areas for innovation in India echoed what we have found in our own work – culture, openness, teamwork, rewards, and role models. He was particularly critical of the research culture in the higher education system (he mentioned that though thousands of PhD theses have been written in the MIMO area of which he is a pioneer, only around 5 of them are from India). Industry’s ability to both do sophisticated innovation as well as take it to the market is limited. And though there is more finance and risk  funding available than before, it is still inadequate for serious technology ventures. He related how the early funding of his two start-ups (Iospan Wireless, Beceem Communivations) involved as much as $100 million in each round, sums of money that would be almost impossible to raise in India.
India has no presence in critical areas.

Dr. Paulraj made a point that we continue to import several of what he called “mass market” technologies (I would prefer to call them sophisticated technologies that underlie most modern industrial infrastructure) like civil jets, telecommunication, computers and precision instruments. (Pharma is the only comparable area where we have a local capability of our own.) While we created a strong technology base in telecommunications in the 1980s, we failed to build on this. As a result, while we were well ahead of China in telecommunications at that time, today we are nowhere while China has firms like Huwaei that are becoming increasingly dominant in the telecom equipment space.

For Dr. Paulraj, a telling sign of India’s abdication in these critical areas was his experience at a premier trade show, the Consumer Electronics Show at Las Vegas, earlier this month. Among the participants in the exhibition were more than 2000 Chinese companies, more than a thousand from the United States, around 800 from Europe, even 3-4 from Vietnam, but not a single firm from India!

Dr. Paulraj concluded by saying that we need willpower and imagination to change this scenario. It seems to me that we also need to build our creative confidence so that the Paulrajs living among us have the confidence to push their ideas forward overcoming all odds.
Posted by Rishikesha Krishnan at 9:25 PM