Any kind of innovation is challenging for it involves questioning the status quo. But innovation in the public sphere is particularly difficult because it involves acceptance by diverse stakeholders who often have conflicting interests. I am currently studying one such innovation that helps us understand what makes public innovation work.


In the early years of the new millennium, citizens of the growing industrial and commercial city of Pune often faced power cuts and “load-shedding” as the state-run electricity utility struggled to meet the increasing demand. Government projections suggested that this situation would continue for several years to come due to the time involved in setting up new power plants and the shortage of resources to do so.

Rather than take this situation for granted, a group of concerned people from the business sector met under the umbrella of the Confederation of Indian Industry and the leadership of Pradeep Bhargava to brainstorm to find solutions to tackle this problem.

They soon realized that the large companies resident in the city – Tata Motors, Bajaj Auto, Bharat Forge, Thermax, and Praj Industries to name just a few – each had huge back-up diesel generation sets that were often idle since the power supplied from the grid was cheaper, even after they paid a commitment charge to the utility for ensuring continuous power supply.

Could this back-up resource be used to meet the shortfall of power faced by the city? A quick back-of-the-envelope calculation revealed that the city’s shortfall and the captive generating capacity of the largest companies matched each other. Feeding this power into the grid was complex technically as well as from a regulatory perspective. Instead, the group realized, why not get the companies to use their diesel gensets for their own consumption during peak periods, thus freeing up grid power for use by the citizens and other businesses of the city?

Using their own gensets involved higher costs for the companies, so a mechanism had to be found to compensate the companies. And this compensation would obviously have to come from the other consumers of the city who would benefit from a continuous power or “Zero Load Shedding” (ZLS) regime. 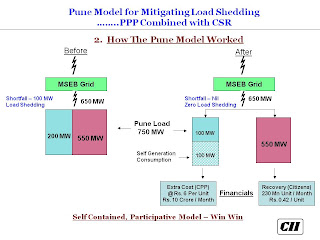 The ZLS model became a reality in mid-2006 after:


The “Pune Power Model” as it came to be known worked in this form till mid 2008 when, thanks to a further growth in demand, the corporate diesel genset capacity was no longer adequate to meet the power demand-supply gap in the city. Subsequently, with the support of the MERC, other variants of the Pune Power Model involving external purchase of power were put into place to ensure continuance of ZLS in Pune.

I recently interviewed several key stakeholders who were involved in the early stages of the introduction of the Pune Power Model. Some key points that emerged from these interviews:

The Pune Power Model is a good example of what Michael Porter and Mark Kramer call “creating shared value” (HBR, January-February 2011) – policies that enhance the competitiveness of companies while at the same time advancing the social conditions of the communities in which they operate. At a small cost, Pune’s largest companies improved the quality of life of the people of the city, enhanced mutual trust, and paved the way for more enduring ways of ensuring continuous power supply to the city.

Posted by Rishikesha Krishnan at 5:12 AM